LEARN MORE ABOUT STORIES FROM A REDLINED NEIGHBORHOOD 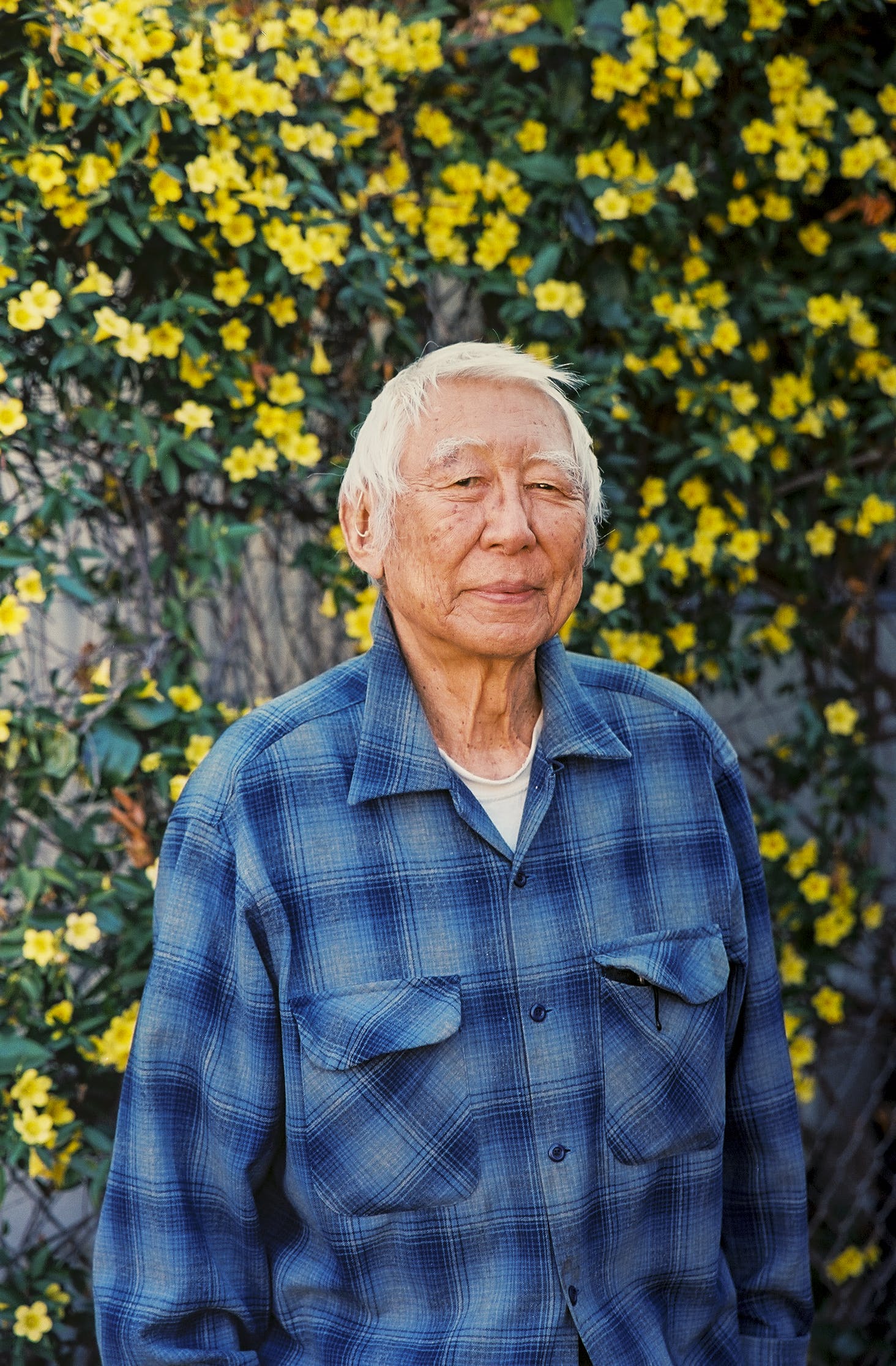 This photographic narrative traces over 100 years of history in a formerly redlined neighborhood. Through the stories of three residents, I examine the ways exclusionary and racist practices like redlining, Japanese American internment, and current gentrification impacted the neighborhood. Virgil Village and Dayton Heights are two neighborhoods within East Hollywood. Currently, there’s a predominantly Central American population, but over the decades this pocket of Los Angeles has been home to multiple ethnic and racial groups including Japanese Americans, Black people, and Chicanos.  Like many other working class, multi-ethnic neighborhoods, this part of Los Angeles was once redlined and considered “blighted” due to its Black and immigrant population. This discriminatory practice led to disinvestment and segregation in communities of color.  The images and text illuminate the many ways “home” is created through community building and the fight to remain in your neighborhood despite exclusionary practices like redlining and displacement. 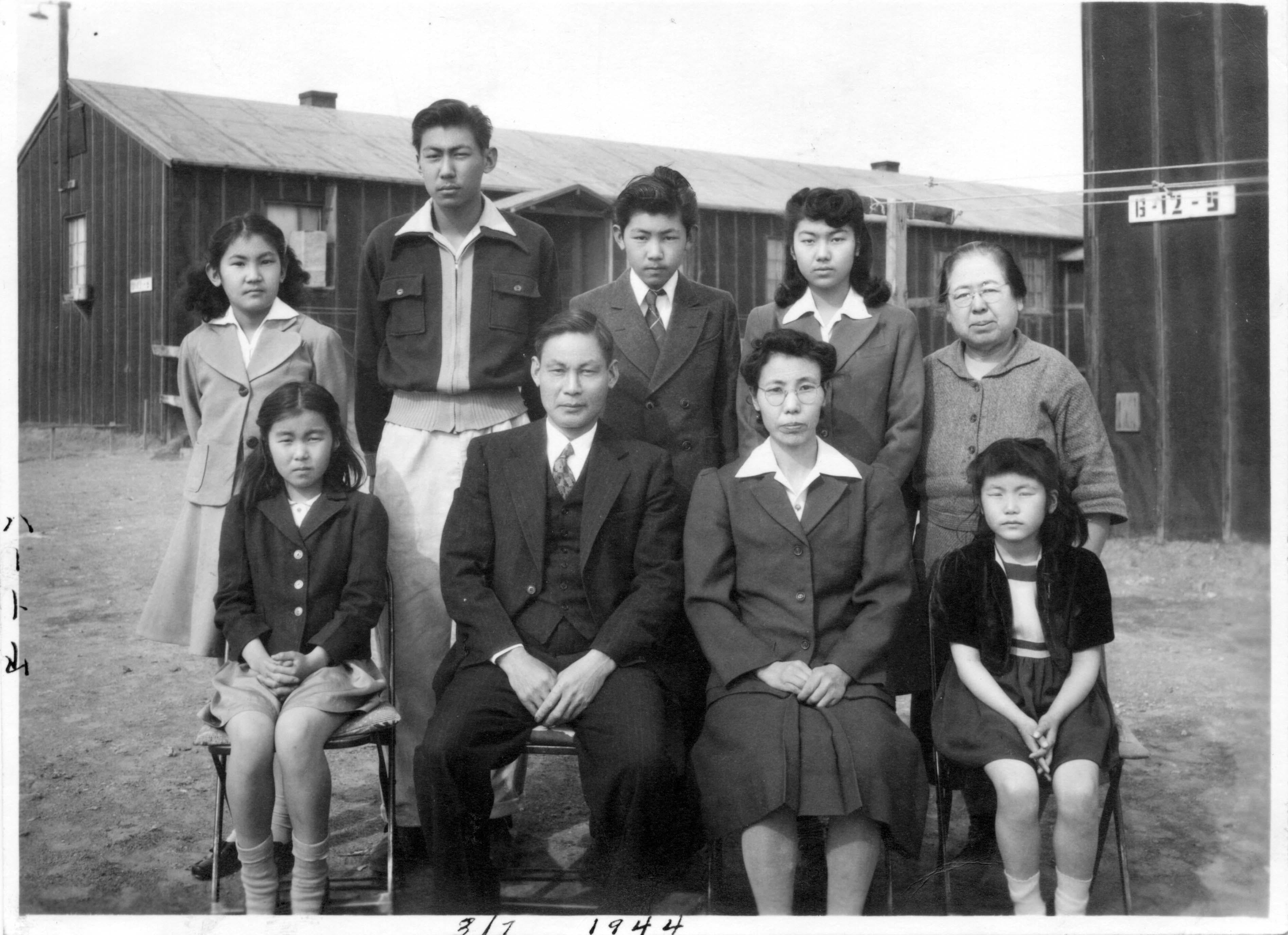 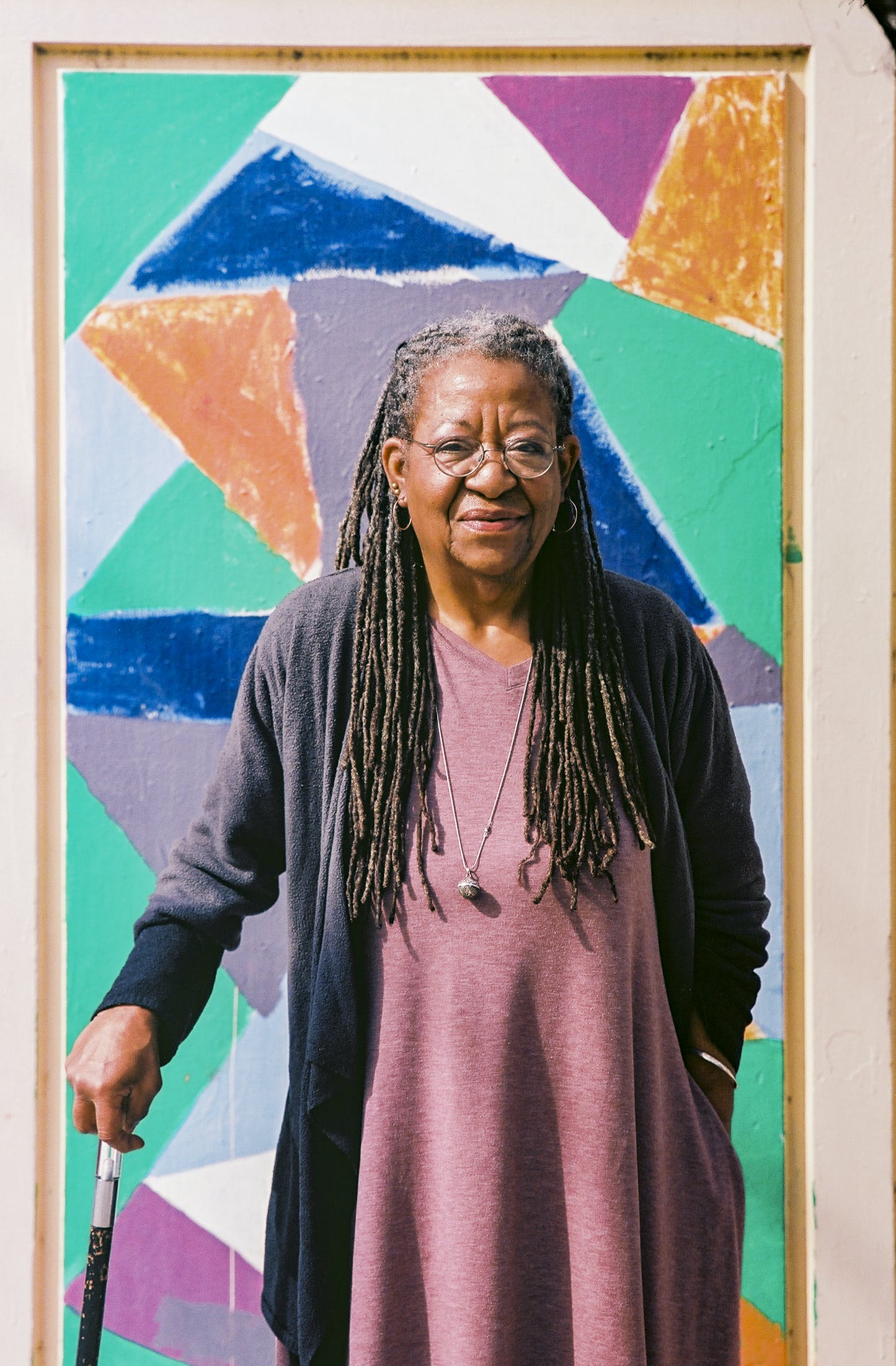 This project centers three stories: Karen Burch, whose great-grandparents left the reconstruction south and settled in what would become East Hollywood, later forming strong bonds with their Japanese American neighbors, Takashi Hoshizaki, an 95-year-old Japanese American resident of Dayton Heights who resisted the draft while he and his family were interned during WWII, and Sandra Morena Tejada, a Salvadoran immigrant and manager of a local restaurant who is feeling the effects of current gentrification. All three residents, though part of separate generations, lived or live in the same geographical area, an area that was once redlined. And all three residents played and continue to play an important role in making their neighborhood a home.  Redlining, a 1930’s official practice which marked areas with Black and immigrant residents as “undesirable” for investment and home loans, combined with racially restrictive covenants, inadvertently created multiethnic neighborhoods all over the country. In East Hollywood, redlined areas consisted of Black, Japanese, Jewish, and Latinx residents who had very little options of where to safely live and work.  Even though housing discrimination was officially outlawed in the late 1960’s, the repercussions of redlining can still be felt. In fact, many formerly redlined neighborhoods are now facing gentrification and displacement, including in East Hollywood. While these discriminatory practices led to cycles of disinvestment, lack of opportunities for home ownership, and a widening racial wealth gap, these communities found ways to create a sense of home through shared food, solidarity, and the drive to create a safe place for their families. 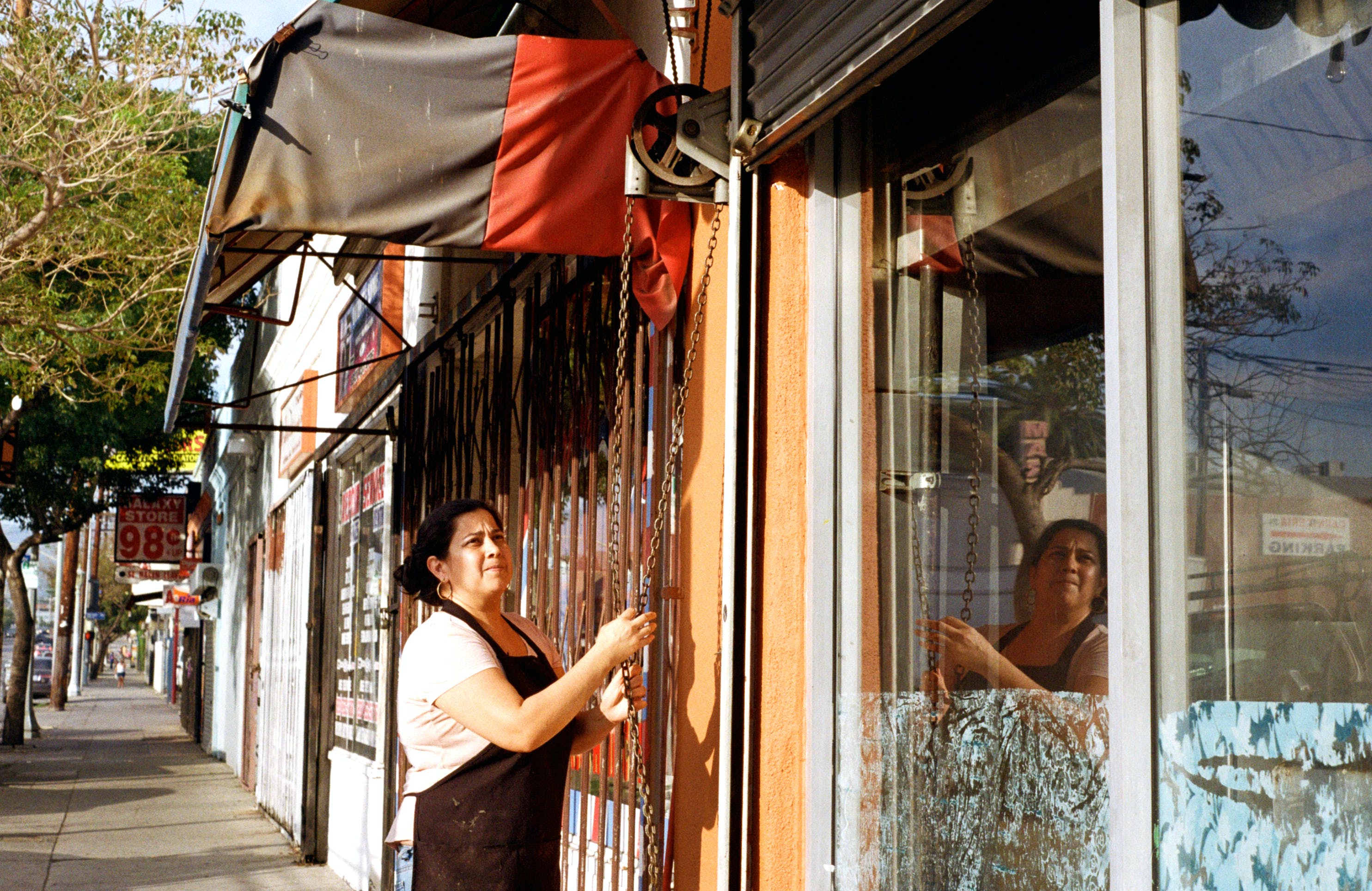 KAREN BURCH Karen Burch is a third generation East Hollywood native; her great-grandparents left the reconstruction south and arrived in Los Angeles on Christmas Eve of 1892. They homesteaded a piece of land and watched the area evolve from farmland to city blocks. Eventually this small pocket of East Hollywood called Dayton Heights would become a Japanese enclave nicknamed “J-Flats.” For decades, Karen’s family forged close relationships with their Japanese-American neighbors and even safeguarded items and properties when their friends were sent to internment camps during WWII. Karen was raised on the site of her great-grandparents' original homestead until she left for college at UCLA. In the 90’s Karen returned to the neighborhood and lived there until 2019 when she was forced to leave due to rising rents. Karen worked for 10 years as a school psychologist at LAUSD, later became a writer and producer in multimedia, and returned to psychology before having to medically retire following an injury. She is the keeper of her family’s story and is currently working on a book about them.  TAKASHI HOSHIZAKI Takashi Hoshizaki moved to the Dayton Heights/J-Flats neighborhood of East Hollywood as a young child in the 1930’s. His father opened Fujiya Market, a grocery store that catered to the Japanese American population in the neighborhood. His family and Karen’s family were neighbors and formed close friendships. In 1942, during WWII, Takashi and his family were forced to leave their neighborhood for the Pomona Assembly Center where Karen’s grandmother and aunt visited him with homemade apple pie. He and his family were later sent to an internment camp in Heart Mountain, Wyoming. After two years in the concentration camp, Takashi received a draft notice. Along with 62 other men, he refused to serve due to the injustices Japanese Americans were being subjected to. They were found guilty of draft evasion. Takashi served two years at McNeil Island Corrections Center. In 1947, the mass resisters received a presidential pardon from President Truman. Takashi later served as an army medic at Fort Hood during the Korean War. He went on to receive a PhD in botanical sciences and worked for the Jet Propulsion Lab studying the circadian rhythm of plants. His late wife Barbara, who he met in a botanical sciences class at Los Angeles City College, became the leading expert on cultivated ferns and travelled the world studying the plants. Takashi, now 95, still lives in the same neighborhood in a house full of ferns his late wife cultivated. He is a board member of the Heart Mountain Wyoming Foundation and continues to share the story of what happened to Japanese-Americans during WWII. SANDRA MORENA TEJADA Sandra Morena Tejada left El Salvador when she was 18 years old due to increasing violence in her home country. She initially lived in the South Bay until she relocated to the Virgil Village neighborhood of East Hollywood due to its presence of Central American residents and businesses. Sandra started out cleaning homes until she landed a job at California Grill, a Salvadoran restaurant on Virgil Avenue which she’s worked at for 12 years. The restaurant, which she now manages, is a meeting ground for the Central American community in the neighborhood. But as the area gentrifies, there’s a growing demographic shift that could mean business loss for a restaurant that relies on a predominantly Latinx customer base.